Hey guys, i just had a quick question. The handle thats on the passenger side of the dash above the airbag broke on my 05 safari. I was gonna head over to the local u-pick yard and find one. It looks as if there are just 2 metal prongs that hold it on. I was just wondering how to take it off without damaging it.
91 Astro LT
Top

I think you have to pull the airbag.
Top

I realized I posted this process in the "What did you do today" thread, but I thought I'd add an answer here in case someone is searching later about the procedure for replacing the passenger dashboard grab handle:

These are just plastic with metal studs molded in: We don't usually use it for actually, you know, grabbing, but in its broken state it was rattling on the freeway and driving me nuts. I think it got cracked by swiveling the passenger seat into it while camping - I'll be careful not to repeat that.

The GM engineer who designed this part and the way it fits into the dashboard should be fired.

Out of a cannon.
Into the sun.

I am, by no means, the first to run into this issue, but the fact that replacing this easily-broken part involves disconnecting the battery, at least partially removing the doghouse, removing the lower kick panel and airbag, and a bunch of other screws, is frankly ludicrous. In the end, my tiny little 1/4" bit driver ratchet handle with a couple of short extensions proved very useful for getting to several fasteners behind the dash trim.

This video was most helpful:


Briefly, the procedure is:
One additional idea that didn't occur to me until I was just snugging things down: The left-hand 10mm bolt that secures the airbag is by far the least-accessible fastener in this operation. In the video, he removes several gold-colored screws at the yellow arrows (5.5mm or 7/32" nut driver required) to be able to get that heater box dropped partially out of the way. Instead, one could maybe drill a hole in the black inner dash material (roughly where I've placed the tip of the red arrow in the following photo) and go straight in with a 10mm nut driver, rather than trying to come up behind it in that tight space. That area will be covered by the kick panel, once replaced. 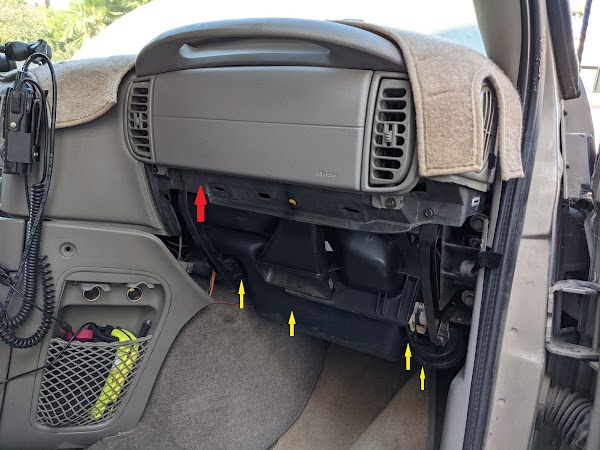 I've swapped this handle out four or five times over the years, all junkyard replacements, they just keep cracking. I can't come to terms paying $160 for a new one. Grrrr, mine is crack now, again!
1998 Astro, 242,000 miles